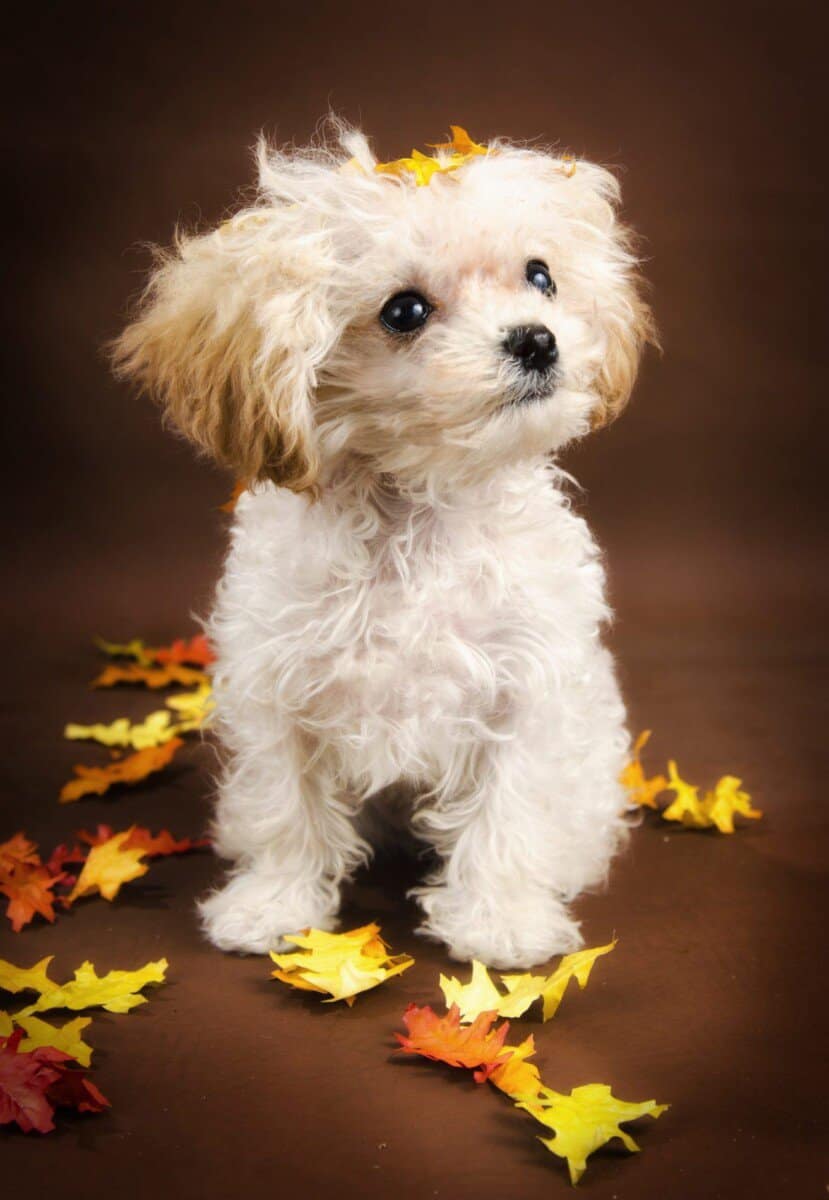 The Tiny Toy poodle came about because people loved the French poodle but desired a miniature poodle for smaller living spaces and more urban living spaces. The toy poodle is about half the size of a standard poodle, which is enough for many a dog lover. Yet it still doesn’t seem to be small enough for even more dog lovers.

That is where the tiny teacup poodle comes in. This isn’t really a dog breed, nor a recognized poodle size. What it is is a toy poodle bred to be half the size of a toy variety and a quarter of the size of most French poodles. Its minute size is very adorable and desirable for people who live in apartments and have even smaller living spaces not well-suited to even a typical toy dog size of dog rather a micro teacup.

While there are no size requirements for teacups, they generally are considered a proper teacup size if the dogs are smaller than nine inches and weigh less than six pounds. Any poodle larger than this in either height or weight is not a teacup, but a toy poodle. If you buy a teacup poodle puppy, be sure to ask the poodle breeder if you can see the parent dogs. If either of the parent dog’s weight or height exceeds teacup size, your puppy may also end up being much larger than you want it to be.

Why the Teacup Variety of Poodle Is So Desirable

Celebrities have a way of making teacup-anything desirable. If a celebrity asks for a teacup piglet, somebody will find a way to breed it into existence. Hence, most micro teacup puppies animals like these poodles are a result of some celebrity wanting a small, cute pet he or she can carry around in a pocket or tote like an accessory. That’s not a bad thing, really, but it should not be the main reason why you want a brown teacup dog (or any other color of cute puppy) as a pet.

Another reason why the teacup is such a desirable small dog is because it travels well as a companion and as an emotional support animal. These mini poodles tend to be very quiet and docile, and fit into small carriers that even airlines allow on a plane. They train quickly and easily such that they are never disobedient or a problem while using any sort of transportation.

Dog trainers, dog performance shows and circus acts use poodles a lot because these dogs are so easily trained. Poodles are excellent at learning all kinds of tricks and they love to please their humans. Along with being excellent companion dogs and emotional support animals, they can do tricks to keep you amused and laughing.

Teacup Puppies and Their Unrelenting Adorableness

Teacup puppies are such tiny balls of fluff that you can carry them around in a coat pocket or a pouch on a sweatshirt like a baby and everyone wants to pet it when they see it. At birth, these already tiny dogs weigh only a few ounces to a pound or so each and can fit in the palm of your hand. They are no bigger than a baby duckling and every bit as cute. When their eyes first open after the required amount of time, their big dark eyes in their tiny little faces is often too much cute for anyone to refuse.

However, a mini poodle puppy leads a very precarious first year of life. Because they are so tiny, it is easy for them to be stepped on and crushed to death entirely by accident. If you get a puppy, be sure to find a very safe place to keep it until it grows into a young adult dog. Even then the danger does not fully subside, but the huge world for these tiny puppies is very dangerous indeed. You should also monitor small children around such a tiny dog, as it does not take much to severely injure or fatally (and accidentally) squeeze a mini poodle puppy.

Other Physical Characteristics of These Little Dogs

As a micro poodle, everything about a teacup is tiny. It is unusual to have any part of these dogs be bigger than the rest of its proportions unless one of the parents or grandparents of these dogs was a toy French poodle or a full-sized poodle breed. That’s why you should always ask a poodle breeder if you can see the parent dogs before choosing to purchase a pup.

Most of these little dogs are white, gray, brown, black, blue, cream, “caffe-au-lait”, red, cream, silver or apricot. They are one of the most colorful little dogs you can buy. The most common colors, however, are black, gray, cream, brown or silver. Other colors in teacup French poodles are rarer and will most likely cost you more because of their rare coat colors. A brown teacup dog has the bizarre genetic defect of graying early in life, making it look like a much older dog than it is.

Any poodle dog can have health problems. A little poodle like these teacups are going to have a lot more problems because of their diminutive size. Most common to the teacups (aside from crushing injuries) are diabetes, heart murmurs and heart defects, epilepsy, digestive tract problems, eye health problems including cataracts and retinal issues and bone deformities.

While better breeding can reduce problems with their hearts and bones, a holistic approach to diet can prevent many of the other health issues. A raw food diet catered to a poodle’s specific nutrition needs, for example, can prevent digestive tract problems and diabetes. Daily walks can help prevent these problems too. Epilepsy occurs later in life, but is often the result of a rapidly aging brain in these dogs. The diet and plenty of fresh clean water helps delay aging brains and brain deterioration in these dogs, thus delaying the development of a seizure disorder altogether.

Be sure to have your tea cup poodle checked regularly and keep him or her free of pests. Because these dogs are so small, a tiny flea infestation or an intestinal parasite can quickly drain them of blood and kill them. Preventing pests and treating your teacup when pests are discovered can save his/her life.

Poodle fur can get very long if left unclipped. People are often surprised to see a shaggy poodle that has not been groomed in a while because it ends up looking a lot more like a long-haired breed of dog with curls than it does a poodle! The fur should be clipped at least once a month.

Poodles should be bathed equally as often to keep their coats soft, free of dirt, pests, and mats, and comfortable enough for the dog in whatever weather temperature is current. IF you want to clip it just like the standard French poodle clip, you can but that’s entirely up to you. A lot of poodle owners, regardless of the size of the poodle, love to clip the fur in the traditional French cut fashion and add bows to the top of the dog’s head.

Nails grow almost as fast as the fur in these animals. With teacups, you definitely want to keep the nails trimmed because these little dogs already have a lot of obstacles to face each day without tripping over their own toenails. Because they can be so fragile at this tiny size, you do not want them running, tripping and crashing into something and breaking a bone in the process.

The biggest plus to owning a teacup doggy is that they need very little space. Poodles in particular are not very upset by a lack of outdoor time. With a teacup puppy, you definitely do not want to put it outside because everything from opossums to raccoons to snakes to birds of prey can carry your little dog off.

It is best to keep him/her indoors if you are going to be gone during the day. As long as he/she is house-trained to a potty mat or a crate, it shouldn’t be a problem. The rest of the time your dog will be content to roam the house or sleep on the furniture.

If you still want to establish an outdoor play space, you can build a small, covered enclosure where your dog can run around inside. Make sure nothing else can get in and that your dog cannot get out. Similar enclosures for cats have been built and they work quite well.

A Word on Poodle Mixed Breed

The Poodle mixed breed are relatively nice dogs, but they cannot achieve the tiny size as a purebred teacup. Quite often breeders will attempt to cross a teacup with a Shih-Tzu, a Pug, a Teacup Chihuahua, Schnoodle, Teacup Maltese with mixed results. While it might still produce a cute dog, it will not look or resemble true teacup poodles very much.

As a dog lover, you might want to stick close to a licensed breeder that does not randomly mix all breeds of tiny dogs at an attempt to get an even smaller poodle. Irresponsible breeding to other small dog breeds leads the puppies to additional congenital defects and health problems. You always want to know exactly what you are getting into when you are after a specific type and size of toy poodle puppy.

If you don’t want a purebred teacup, that is okay too. There are plenty of pound rescue dogs with poodle bloodlines. Most of them make decent, trainable pets so long as they are not bred with more vicious dog breeds.

Where do teacup poodles come from? Their original place of orgin is France or Germany. These teacups have been bred down from the original Standard Poodle breed.

Do teacup poodles stay small? Yes, they do. Hence this breed of poodle is called the teacup.

Do teacup poodles bark a lot? They certainly can but if they have proper training from the beginning of their puppyhood and realize that thier owner is the alpha they will be less inclined to. Also if they have the proper diet and thier nutritional needs are met with correct supplementation they have a much greater chance of being balanced emotionally and will find the need to bark less than usual.

How long does a teacup poodle live? Can be approximately 12-15 years depending on if good health is maintained.

How do you potty train a teacup poodle? Just like you would any other dog – with plenty of patience, consistency, and a leader mentality.