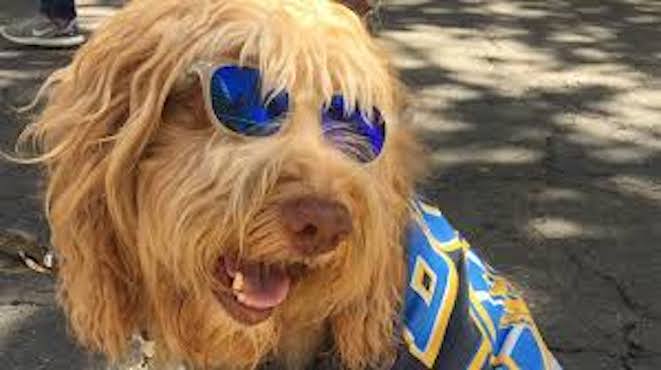 Compared to many other dogs, this a very recent breed. The first one was bred in 1989 by Wally Conron, who was working as the breeding manager for Guide Dogs Victoria. The purpose was to have a low-maintenance dog for a blind woman whose husband was allergic to most dogs. Eye of the Pacific in Hawaii had a very similar idea at the same time so they partnered on it.

Initially, Conron thought that the poodle would be right for the job. However, after examining 33 poodles, he realized that the poodle didn’t have the right temperament to be a guide dog. It was another three years before he came up with cross-breeding the Labrador with the poodle. His boss, John Gossling, happened to have a poodle named Harley who didn’t have any health issues. As a result, they bred him with a Labrador named Brandy. It became a success with three puppies nine months later.

However, an unforeseen controversy came to light almost immediately. Only one of the puppies, named Sultan, came back as being genetically compatible as a guide dog. As a result, he was sent to Hawaii to begin training as soon as he was weaned. Conron wanted to train the other two but discovered that no one wanted them. He invented the name Labradoodle when he worked with the business’s public relations management team.

From there, the labradoodles’ popularity skyrocketed so much that many unscrupulous profit-oriented breeders also got ahold of them. As a result, Conron says that he now regrets starting the breed. However, many labradoodles are still used as guide dogs and it set the trend for adding “oodle” to several new breeds, such as the schnoodle.

Labradoodles can have three types of hair, straight, curly and wavy. The curly hair is called fleece and the wavy is called flax. They come in several different colors, which include:

They make excellent first-time dogs. However, they are not well-suited to apartments or tiny houses. They have a lot of energy, need a lot of room to run around and exercise. They need up to a full hour of exercise every day.

Since they tend to be rather exuberant jumpers, they may be a little much for very young children. If you have kids four and older, they’ll probably have a great time playing and going to the park with them. Do be sure to teach your kids not to pull on their tails or ears. They’ll see it as a threat and react aggressively. Withholding food or toys from them as a punishment never works, either.

Labradoodles tend to hate being alone. As a result, if you have a full-time job or an unpredictable work schedule, it’s probably not the best dog for you. However, if you road travel a lot, they can aide you with plenty of exercise during breaks. They also make excellent hiking companions and if you’re a runner, your dog can easily tag along on a leash.

Labradoodles were specifically bred to be peaceful. As a result, they typically don’t make good protection dogs. However, like with every other dog, their temperament is also dependent on their early socialization. However, aside from making good guide dogs for the blind, they also make good therapy dogs for those on the autism spectrum, those struggling with clinical depression, PTSD, physical disabilities, etc. As a result, some also work as hospital and rehabilitation therapy dogs.

When it comes to their diet, two cups of dried food spaced out as two meals is usually best. Like their Labrador parent, Labradoodles are also known to have issues with bloating. As a result, it’s best to allow ample time between the two meals. If you’re not sure about your dog’s weight, feel the rib area with minimal force. If you have to use more than that, it’s probably time to cut back on their food and especially to temporarily up the ante with their exercise.

Labradoodles are low-maintenance dogs. They tend not to have the body odor that their Labrador parent does. Some shed more than others. The lowest maintenance ones usually need only up to two brushings per week. However, they do need the usual ear cleanings and nail clippings.

Since Labradoodles are an especially vulnerable mix, they are best adopted from a licensed and reputable Labradoodle breeder. A reputable breeder may be hard to find but do your homework, it will be well worth it.

If you’re going to adopt from a breeder, it’s best to meet him or her in person. Always check the reviews and for memberships to reputable organizations such as the American Kennel Club.

A rescue shelter is your second best bet. Unfortunately, a good number of labradoodles end up in the shelters due to their initial owners majorly underestimating their full sizes. As a result, you’re highly advised to consider your home’s size before adopting one. Labradoodles do best in spacious homes with yards.

Is hip dysplasia an issue? Yes, they can be predisposed, depending on the breeder specifications and proper nutrition and immune system function.

Are they considered a good therapy dog or service dog? Yes because both breeds are working dogs this makes them good candidates for therapy and service dogs.

Is a lab poodle mix the same as the labradoodle breed? The lab-poodle mix is essentially the Labradoodle. They are technically not considered a breed though.

How are they different from a golden retriever? The Golden Retriever is considered an actual breed of dog. Not so for the labradoodle.

Does a labradoodle coat need special care? Because of the poodle aspect of the mix the coat needs maintenance and grooming for sure.

How big is a miniature labradoodle? They average 15-25 pounds stand 14-16 inches tall.

Is a Labradoodle puppy easy to train? Labradors are extremely smart and so are poodles. They are independently working breeds and given the right training and instruction are very trainable.